There are literally thousands of artificial chemicals in our food supply from preservatives to emulsifiers to food coloring dyes. When I say “artificial” I mean that the chemical was man-made, in contrast to a “natural” chemical that is derived from nature in some way. In this month’s Science of Food column I wanted to bring awareness to the widespread use of artificial food additives and their potential harm to human health.

Before I continue I’d like to inform my readers of my past scientific background so you understand my perspective on this topic. I’m trained as a synthetic organic chemist; having earned my doctorate in 2005 from the University of Michigan, learning about how carbon-based “organic” molecules function and how to build new and naturally occurring molecules in the lab. I then went off and worked as a research scientist at Amgen, a biopharmaceutical company in San Francisco. Working with a team of scientists, we designed and developed new drug candidates with specific physical and chemical properties that targeted specific processes in the body involved in disease. I continued this type of research at the University of Colorado for a total of nearly 15 years.

When I walked away from this research experience and opened my Holistic Health studio here in Summit County, I had an intimate understanding of how the body reacts when it’s exposed to man-made chemicals, whether it’s a pharmaceutical drug, a food additive or a “natural” molecule, and applied this knowledge to what I call the “Science of Food.” All the molecules we eat, just like a drug, whether they are natural or artificial, can serve as chemical messengers that send signals in the body causing certain processes to turn on or turn off, like chronic inflammation (a topic I’ve written on in my previous columns, see “Eat Your Electrons”).

When it comes to food additives, unfortunately the U.S. government does not approach them with the “precautionary principle.” Instead, artificial food additives are allowed to be used in our foods and other consumer products (sodas, cough syrup, vitamins, shampoos) with the assumption that they are safe unless proven otherwise. Although sometimes acute exposure can cause immediate symptoms, it is the chronic, accumulated exposure over time that can also make the chemical toxic, though it appears to be safe in the short-term. This can make it difficult to design and implement a study to prove that a chemical is truly safe and few, if any, food additives currently in use have gone through such rigorous studies.

Dose is also a big factor and one reason why children are often more affected by food additives, because they are smaller. Think of an adult drinking a 12 ounce soda versus a child drinking the same size soda. The concentration of the sugar and additives in the child’s body will be much higher than the adult.

Synthetic dyes used as artificial food colorings are derived from coal tar and petroleum (i.e. carbon-based) and often have an ionic structure that helps them dissolve in water or an “azo” group, that is the chemical feature that causes the molecule to absorb light at a specific wavelength resulting in the red color. You may have seen Red 40, Yellow 5 and Yellow 6 as ingredients on your food labels as these are the three artificial colors in use today that make up the majority of food dye additives used in foods in the U.S.

Researchers and doctors have proposed that exposure to food dyes might be linked with behavioral problems in children since 1975, when Dr. Ben Feingold published “Why your Child is Hyperactive,” including attention deficit hyperactivity disorder, autism and cancer. A more recent study published in 2007 out of the University of Southampton also concluded that artificial colors are linked to hyperactivity in children. Some children are particularly sensitive to food dyes, perhaps from a genetic predisposition, but also because some kids consume large amounts of foods and beverages that contain food dyes. Food companies are marketing these products to children!

Due to the potential harm of such artificial food dyes, many countries in Europe have banned certain types (e.g. azo dyes like Red 40) or require a warning label. There are also concerns about Red 3 (aka erythrosine) after studies have shown adverse health effects in laboratory animal studies. I can tell just by looking at the chemical structure of Red 3 that it may act as an “intercalator,” a type of molecule that interferes with DNA and can lead to disease.

Food dyes are just a part of the story. There are other common food additives that serve as emulsifiers and preservatives like soy lecithin, TBHQ (tertiary butylhydroquinone), BHT (butylated hydroxytoluene) sodium benzoate and even mercury additives were used at one time. Although some may argue that doses of the food additives we consume are too small to be any risk to human health, there is not enough scientific evidence to prove this for each artificial chemical in use today. So why do we continue to put these nutritionally void and potentially harmful chemicals in our food? Well, it is called the “Food Industry” for a reason — they aim to improve food textures, shelf life and food coloration to make a profit.

I’ve focused this article on the potential toxicity of artificial food dyes, and have just barely scratched the surface on the broader topic of food additives (see SummitDaily.com “Simplifying Sugars” for a review of artificial sweeteners). However, this story hopefully exemplifies the take home message: Avoid eating processed foods and brightly colored foods that come in cans, boxes and other prepackaged forms that are packed with artificial food additives especially harmful to children. Any chemical we ingest has the potential to act as a chemical messenger that can interfere with the body’s ability to function properly.

If you want to avoid artificial chemicals, eat whole foods and read food labels carefully. Don’t be fooled by the word “natural” either, this can often be misleading. As a new mom, I’m especially aware of what I’m putting in my own body and my baby’s, and I would never give her food containing such food additives. I know it can be hard to change our old habits, but it’s worth it, for you and for our children.

Dr. Lisa Julian Ph.D. has a passion for organic chemistry the “molecules of life,” and its application to food and health. She’s the owner of Elevated Yoga & Holistic Health in Frisco and teaches Science and Nutrition at CU Denver and CMC. She can be reached at 970-401-2071 or ldjulian@gmail.com For more information about services offered at her studio, visit ElevatedYogaColorado.com. 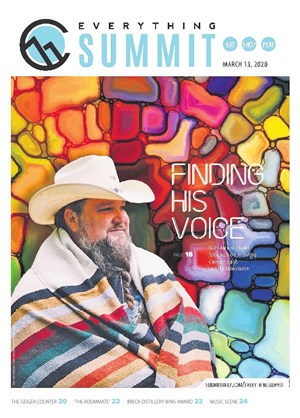