DENVER — Denver is cranking up voter outreach to some folks who probably think they aren’t eligible to cast ballots — jail inmates.

The Denver Elections Division announced Wednesday that it plans to make a special effort this year to remind the 2,000 or so people Denver’s jails that they may be eligible to vote.

Colorado bars felons from voting, but citizens who are awaiting trial and anyone who has completed a misdemeanor sentence are eligible.

“We want to make sure that people know that anyone that’s confined has always had the ability to cast a vote,” said Alton Dillard, spokesman for the Denver Elections Division.

A nonprofit advocacy group, the Colorado Criminal Justice Reform Coalition, plans to pay for pamphlets and increased educational efforts this election season to explain the rules to jail inmates.

Denver is the first Colorado city to encourage jail voting. But similar outreach efforts go back more than a decade in other states.

Most people in Denver’s two jails are in custody only briefly, but several hundred are held for weeks, months or years. Elections administrators had no guess how many of the long-term inmates may be eligible to vote or how many vote already because they know they are eligible.

After the educational effort, eligible inmates can receive ballot by mail and cast ballots. Election judges will be dispatched to the facilities on Election Day to make sure the election is being held properly, similar to voting procedures in other public housing facilities, such as group nursing homes. Dillard said the change would add no expense to the election.

“There has been kind of a long-term urban myth that people once they have a criminal record are not allowed to vote,” said Pam Clifton of the CCJRC. “That’s a misperception that we’re trying to change.”

WET MAY BOOSTS SNOWPACK IN MOST OF COLORADO’S RIVER BASINS

DENVER — A wet May boosted the snow across most of Colorado’s mountains, putting the state in good shape for the spring and summer runoff.

Water officials said Tuesday the snowpack in six of the state’s seven river basins is well above normal for this time of year. The deeper snows range from 150 percent of normal in the Yampa and White Basin in northwestern Colorado to 235 percent in the South Platte Basin in north-central Colorado.

The exception is southern Colorado’s Rio Grande Basin, which is 85 percent of normal.

Snowmelt flows into reservoirs and provides most of the state’s water. City officials and irrigators monitor the snowpack to predict how much water will be available through the dry summer months.

TELLURIDE, Colo. — A rafter from Texas is recovering after being rescued from the cold waters of the San Miguel River in southwestern Colorado.

The San Miguel Sheriff’s Office says the woman was one of four passengers on a commercial raft that hit a rock and went overboard Tuesday. The others were quickly pulled back into the boat. But the woman was in the water for between five and 10 minutes and was unconscious when she lifted out of the river, which is running high like many around the state because of the spring snow melt.

The sheriff’s office says she stopped breathing but started again after the guide performed CPR. She regained consciousness and was taken to the hospital after the other passengers called 911 from a home near the river.

PUEBLO, Colo. — The Environmental Protection Agency will clean 19 homes contaminated with lead dust from a former smelter in Pueblo starting later this month.

The Pueblo Chieftain reports that the amount of dust found in some of the homes, among the first 300 tested in the Colorado Smelter Superfund Study Area, was over seven times higher than acceptable limits.

The EPA’s regional Superfund manager, William Murray, says other toxic metals were also found, pointing to the smelter as the source of the lead, rather than just old paint. He told residents at a meeting Tuesday that the EPA would pay for the interior cleanups as well as following yard cleanups.

The EPA also hopes to test the remaining 1,600 homes near the site of the smelter, which closed in 1908.

Denver got a taste of Sikh culture on Saturday at the first ever Sikh parade.

The event was geared toward bringing awareness of Sikhism to the Denver area and celebrating the customs of the growing community.

“This whole event is to make sure more people know about our community,” said Serene Singh, the youth president of the Colorado Springs Sikh Temple and the president and founder of the Sikh Student Association of Boulder.

Paul Juneja, an organizer of the parade, estimated there are about 500 Sikh families in the Denver area. More than 1,000 people attended the celebration.

The Sikh religion is founded on principles of equality. It emerged in India at the height of a divisive caste system.

“Sikhs are about equality, regardless of race, religion, caste or sex,” Serene said.

The religion also centers on prayer, selfless service and hard work. It’s known for the men wearing colorful turbans, and the fact that Sikhs don’t cut their hair.

Sunday’s festivities, which began at 9:30 a.m. and lasted until 4 p.m., also included prayer, music and traditional Sikh martial arts. Participants feasted on Indian foods such as samosas and gulab jamun throughout the day.

The Sikhs carried the holy book, which is considered a living guru, through the streets to bring blessings to the Denver community.

“This bullying and the inflammatory remarks are not isolated incidents,” Singh said. “We look different because the gurus wanted us to be strong and different. Turban does not equal terrorist.”

WOMAN DIES AFTER FALLING FROM COMMERCIAL RAFT ON ARKANSAS RIVER

A woman died after falling out of a commercial raft into the Arkansas River below the Royal Gorge Sunday afternoon, Fremont County authorities said.

Neither the name of the woman nor the company was released.

The woman died by the river west of Cañon City, between the bridge at the base of the gorge and the city, near the Parkdale Recreation Area, Richards said.

The cause of death hasn’t been established.

Deaths while rafting sometimes happen during high flows. About 10 people a year die while boating in Colorado, on average, including kayakers and rafters. The state’s whitewater rafting industry draws hundreds of thousands of people a year.

“The runoff has started a little bit,” Richards said, “but the river is not really high.”

That’s significantly less than the 60 citations issued April 20, when thousands gathered in Civic Center to celebrate the holiday devoted to smoking marijuana.

Although recreational marijuana use was legalized in Colorado with the passage of Amendment 64 in 2012, consuming in public remains illegal.

Police also issued three citations for driving under suspension and two for flying drones in a public park.

The rally, which ran from 10 a.m. to 10 p.m., brought thousands of marijuana enthusiasts to downtown Denver. Organizers were forced to postpone the original event, which was scheduled for April 16 because of snowy weather. 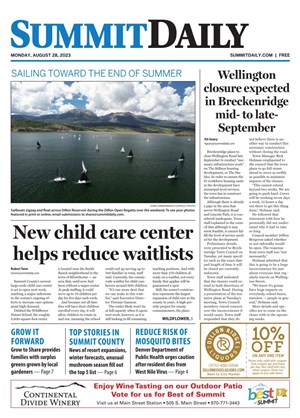