DENVER — Suspicion over federal plans to restore endangered Mexican gray wolves in the Southwest has spread to Colorado and Utah, where ranchers and officials are fiercely resisting any attempt to import the predators.

About 110 Mexican gray wolves — a smaller subspecies of the gray wolf — now roam a portion of Arizona and New Mexico, nearly two decades after the U.S. Fish and Wildlife Service released 11 wolves there to restart a population that had nearly vanished.

The agency hopes to complete a comprehensive recovery plan for the Mexican wolf in 2017, and officials say they’ve made no decision about releasing them in Colorado or Utah.

Wildlife commissioners in Utah and Colorado also spoke out against releasing Mexican wolves in their states — the Utah Wildlife Board in December and the Colorado Parks and Wildlife Commission last Wednesday.

The Fish and Wildlife Service defended the experts and the process.

Environmental groups, meanwhile, are pushing for the release of more captive-bred wolves to bolster the population in those states.

In Colorado and Utah, opponents argue that wolves would inflict costly and cruel losses on cattle and sheep and decimate big game herds that support the lucrative hunting industry. They also say Mexican wolves aren’t native to their states and bringing them in could taint the gene pool if they bred with gray wolves roaming down from the northern Rockies.

Wolf advocates say the fears are overblown, and that Mexican wolves need more ranges to avoid extinction. Parts of Colorado and Utah would be ideal for wolves, said Jonathan Proctor of Defenders of Wildlife, and he argued that both states are within the wolves’ historical range.

The West needs wolves to help restore balance to the environment, he said.

“It’s we humans who have eradicated all the wolves from the West,” Proctor said. “It’s our responsibility to bring this animal back.”

Wolves have long been deeply divisive subject in the region. They were hunted, trapped or driven out of many areas by the end of the last century and were regarded as a menace to largely defenseless sheep and cattle. But they also became a symbol for the environmental movement, a noble if fearsome avatar of the wild. 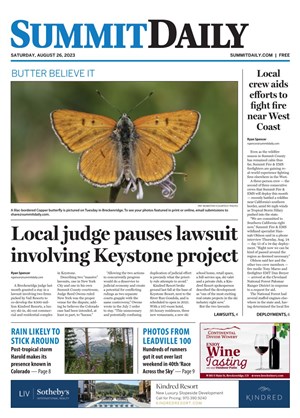