The view from 31,000 feet: A philosopher looks at fracking (column) | SummitDaily.com
YOUR AD HERE »

The view from 31,000 feet: A philosopher looks at fracking (column)

I was flying the red-eye home to Portland, when the pilot spoke over the intercom. “We are currently over North Dakota. Below us are the famous Bakken shale-oil fracking fields.” I looked down into the night. As far as I could see toward every horizon, the plain was studded with flames — oil rigs flaring methane. How is it possible, I remember asking myself, that humans can do this to the Earth?

Of course, what it is possible for us to do depends on the stories we tell ourselves. A culture embodies a worldview, answers to the fundamental questions of the human condition: What is the Earth? What is the place of humans on Earth? How, then, shall we live? A worldview is so pervasive, so built into the structure of our lives that we don’t notice or question it, any more than a trout questions water. Inside the structure of such a story, acts that would otherwise be unthinkable, become all that can be thought.

What story permits fracking’s and the industrial growth economy’s systematic violence against the Earth? A superhero comic book, I’m thinking, fantasies of planetary subjugation and mastery that stir the loins of boys and Wall Street bankers. That story tells us that we humans are separate from and superior to the rest of Earth’s beings, in control of a planet that is ours alone. We are lonely heroes in endless competition. The losers in that competition — plants, animals, future generations — should be grateful to live on the toxic trickle-down excess of us winners. Of course, superheroes are exempt from the rules that govern the rest of the world.

Within this story, poisoning ground water and smashing ancient rock for petroleum make perfectly good sense. But that story is wildly inconsistent with emerging ecological and evolutionary understandings.

The time when one set of stories, one worldview, grinds up against another is unstable and dangerous. Things fall apart; the center cannot hold. The facts that people encounter, the feelings they directly experience, no longer fit the story they were born to, but the new story is not yet fully formed, and who can make sense of this tectonic trembling? This a time of shouts and bullies, as the old story struggles violently for control of the narrative.

Then something happens. The old story shatters and a new story emerges to take its place. Philosophers call it a paradigm shift, this sudden leap from one foundational understanding to another. No one can know where it begins: Copernicus’ workshop in Poland. Selma, Alabama. The Berlin Wall. The Bakken fracking fields in North Dakota.

North Dakota is the place where fracking has driven the old story to its crumbling edge. It is a reductio ad absurdum of the theory of human domination, to crush the last drop of oil from the rocks, to take everything until there is nothing left to take, to wring out the washrag to drink the spilled wine — and to claim that this is right and smart. Suddenly, this is inconceivable. Literally that, unthinkable — because it can only make sense inside a system of thought that is now being shattered with every underground fracturing of ancient rock.

A very new, or very old, story is beginning to take its place. It’s an ecological-ethical-indigenous account of human kinship in a world that is interconnected, interdependent, finite, beautiful and resilient. Like any worldview, it provides a measure of what is sensible and good.

Because we understand that the world’s systems are interconnected, we realize that damage to any part is damage to the whole. This is the foundation of justice.

Because we understand the world is interdependent, we acknowledge our reliance on one another and on the life-giving systems of the Earth. This is the foundation of compassion.

Because we recognize that the Earth is finite, we embrace an ethic of restraint and precaution to replace a destructive ethos of excess. This is the foundation of prudence.

Because we understand the planet’s systems are resilient, we are called to stop the harm and undo the damage that has been done. This is the foundation of hope.

Because the Earth is beautiful, we will refuse to tolerate the oil industry’s wars against the Earth. This is the beginning of moral courage.

Kathleen Dean Moore is a contributor to Writers on the Range, a column service of High Country News (hcn.org). She is a writer and distinguished professor of philosophy at Oregon State University. 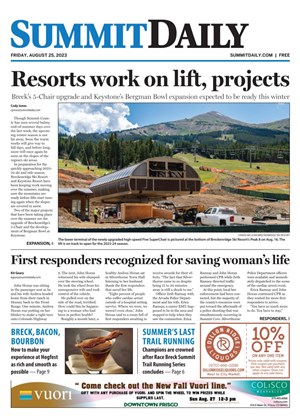